9U Hustlers Finish Second at Mutiny in the Park

The 9U Hustlers competed in the Mutiny at The Park tournament in Olney, Maryland this past weekend. The 9U bracket was loaded with some of the best teams from Maryland and Delaware. Although the weather was miserable and cold all weekend, the 9U Hustlers were playing like it was 85 degrees and sunny.

Saturday started off with the Hustlers playing the Damascus Cougars. Damon Baker started things off for the Hustlers on the hill pitching two innings of shutout baseball and fanning two batters. The bottom half of the 1st saw the Hustlers batting through their lineup while scoring 7 runs. The Hustlers continued their hot hitting plating 18 batters in the bottom of the 2nd adding another 13 runs to the board and highlighted by homeruns by both Ryan Coulby and Chase Jones. Jackson Raymond took the mound for the Hustlers in the 3rd and 4th innings allowing two runs while striking out five batters. The Hustler’s half of the 3rd was more of the same with 16 batters coming to the plate while scoring another 10 runs. The Hustlers were able to pull off the early defeat winning by run rule collecting 17 hits along the way. Both pitchers were very efficient throwing mostly strikes on very few pitches. Darian Gaskins, Alex Simmons, and Jake Rydzewski each had 3 hits. Gaskins collected a triple and two doubles.

The young Hustlers faced off next against an impressive Delaware Rockets team. Chase Jones got the start on the mound throwing two innings while only allowing two runs, striking out four, and not allowing a walk. Mickey Cammarata worked the 3rd and 4th innings for the Hustlers surrendering five runs and striking out three. The Hustlers found themselves down 5-0 entering the bottom half of the 3rd before they could get their offense going. The inning started with walks by both Damon Baker and Colton Facine. Mickey Cammarata loaded the bases with a sharp line drive to left field. Chase Jones followed with a frozen rope to center field scoring the first Hustlers run of the day. After a walk to Darian Gaskins scoring another Hustlers run, the young Hustlers showed some savvy base running scoring two additional runs before the inning ended. In the bottom of the 4th, the Hustlers were able put some distance between them and the team from Delaware. Following walks by Grady Beaver and Luke Wood to start the inning, Alex Simmons drove a two strike pitch into right field for a double that allowed two runs to score easily. The Hustlers weren’t finished as only a few batters later Damon Baker drove in another run on a bullet hit to center field knotting the game at 7-7. Following a single by Mickey Cammarata, Chase Jones was able to bring in Damon and Mickey with a single to center. Jackson Raymond pitched the 5th allowing one run, while striking out two, and allowing no walks on just 16 pitches. Damon Baker assumed the closer role in the 6th needing only 14 pitches to shutout the Rockets batters allowing no runs, no hits, and striking out the final batter of the inning to seal the victory for the Hustlers. Following the team’s performance on day one, Coach Raymond commented “I am really pleased with the team baseball we played today. Everyone contributed and played a role in each game.”

Sunday found the Hustlers as the #3 seed. As luck would have it, their 1st game of the day was a rematch from Saturday’s game against the Delaware Rockets. Damon Baker took the mound for the Hustlers in the 1st facing just three batters and striking out two. Unlike the day before, the Hustlers got their bats going early. Mickey Cammarata got things going with a sharp line drive to left field. Chase Jones followed with a hard hit ground ball through the hole on the left side scoring Mickey, who had stolen 2nd base on the previous pitch. Darian Gaskins was able to draw a four pitch walk. Ryan Coulby got in on the action with a line drive to centerfield scoring Jones. Jackson Raymond was able to advance Gaskins home on a well hit ball to the left side. Grady Beaver brought home Coulby with a hard hit ball that the Rockets third baseman was just lucky enough to knockdown. Damon Baker was on the mound again for the bottom half of the 2nd inning but this time the Rockets batters were able to barrel up some pitches and tie the game back up at 4-4. The Hustlers were able to put a run up in the bottom of the second when Jake Rydzewski scored after hitting a fielder’s choice and consecutive throwing errors. Ryan Coulby took the mound for the top of the 3rd and was able to get two outs, but not before allowing two runs and loading the bases. Jackson Raymond entered the game to get the final out of the inning. The Hustlers got their bats going again in the bottom of the 3rd with a bomb by Chase Jones flying the centerfielder’s head and making it all the way to the 280’ fence. Darian Gaskins followed with a double to the right center gap. Ryan Coulby brought Gaskins home on a double to the left center alley. Jackson Raymond singled on a line drive to right field. Grady Beaver followed with a nice inside-out hit to the right side bringing Ryan Coulby around to score. Alex Simmons was able to keep the runners moving with a hard ground out to the third baseman allowing Raymond to score. Jake Rydzewski brought in the final run of the inning beating out the throw from 3rd and allowing Beaver to reach the plate. Jackson Raymond stayed in the game to pitch the top of the 4th allowing two runs. The bottom half of the 4th had the Hustlers holding on to an 8-10 lead, so they were looking for a couple insurance runs. Damon Baker led off the inning with a single through the hole on the right side. By the 5th pitch of Mickey Cammarata’s following at bat, Baker was sitting on 3rd with no outs. Mickey hit an effective swinging bunt that allowed Baker to score, but Cammarata was throw out on a close play at 1st. The Rockets were able to make some terrific plays on the next two Hustlers batters to limit the damage. Chase Jones entered the game in the 5th facing only four batters before striking out two and ending the inning. The Hustlers were not able to get anything going in the bottom half of the 5th, so they would start the 6th up 11-8 and Jones on the mound. The Rockets were able to use walks and some untimely errors to tie the game back up at 11-11. The bottom half of the 6th ended with a double play and momentum seemed to be changing into the hands of the Rockets. With the score tied after 6, the game continued into the seventh frame. Mickey Cammarata took the hill for the Hustlers and struck out two batters without allowing a run. Mickey led off the bottom of the 7th working a 3-2 count into a walk. After Chase Jones fouled off the first two pitches, Mickey Cammarata was able to steal 2nd base to get into scoring position. Chase Jones barreled up the forth pitch of the at bat and again launched one over the centerfielder’s head walking off in grand fashion for the 13-11 victory and a trip to the semi-final game.

The semi-final matchup was against AYRA on OBGC Field #3 where the Hustlers started on Saturday against Damascus. Jackson Raymond got the start for the Hustlers and retired the first three batters on 9 pitches. The Hustlers batters seem to like the backdrop of OBGC Field #3, because they wasted no time spraying the ball around the park. Damon Baker led off by hitting a triple on the 2nd pitch to the left center gap. Mickey Cammarata followed with a sharply hit ball to 3rd scoring Baker. Chase Jones then doubled to left center bringing Cammarata around to score. Darian Gaskins uncorked a laser to the right centerfield gap scoring Jones and he after the throw to third found the fence instead of the third baseman’s glove. Ryan Coulby did his part to get ducks on the pond by singling on a sinking liner to left field. Jackson Raymond took an outside pitch to left field doubling and sending Coulby to third. Coulby was able to steal home on a wild pitch before the inning ended and having the Hustlers up 5-0. Jackson Raymond again took the mound in the bottom of the 2nd again facing the minimum number of AYRA batters and only throwing 10 pitches. The bottom of the 2nd saw more of the same from the Hustlers. Jake Rydzewski led off with a single followed by a walk by Colton Facine. Damon Baker loaded the bases with a single up the middle. Mickey Cammarata worked a 3-2 count into a run scoring walk. Chase Jones continued the scoring by clearing the bases with a hit to the left side followed by an errant throw going down the right field line. Jones advanced to second on the play and was brought in to score by a single to centerfield by Jackson Raymond. Raymond quickly stole 2nd and was waved around third when Grady Beaver singled on a hard hit ball up the middle. The top of the 3rd had Chase Jones taking the hill for the Hustlers. Chase allowed four runs on four hits while striking out three. The Hustler’s bats went silent in the 3rd and Chase was quickly back out for the top of the 4th. Chase Jones worked very efficiently in the 4th allowing no runs on just one hit and added another strikeout to his total for the day. In the bottom half of the 4th, Chase led things off reaching first by taking a pitch in the thigh. Darian Gaskins reached on a walk. Ryan Coulby drove in Jones working the ball nicely to the opposite field on an outside pitch. Jackson Raymond was able to bring Gaskins home pushing the score to 13-4 Hustlers. As soon as the 5th inning started with Mickey Cammarata on the mound, it appeared as though the Hustlers were going to self-destruct. The Hustler’s defense committed three errors in the frame allowing seven runs to score. The Hustlers tacked on two more runs in the bottom of the 5th with Luke Wood scoring on a Damon Baker fielder’s choice and Jake Rydzewski scoring on a line drive to centerfield after Jake previously reached first on a single to centerfield himself. Mickey Cammarata entered the top of the 6th with an 11-15 lead and was able to close it out allowing only two additional runs for a 13-15 final and a trip to the championship game.

The championship game pitted the Hustlers against the Olney Pirates. Jackson Raymond, Damon Baker, and Chase Jones all pitched well for the Hustlers allowing only two walks in the game while striking out four Pirates batters. The Hustlers just couldn’t get things going against the Pirates pitching managing only 3 runs on 8 hits. Darian Gaskins and Grady Beaver led the Hustlers with two hits a piece while Damon Baker, Mickey Cammarata, Alex Simmons, and Jake Rydzewski each had one hit. “This weekend was a great start for this young team. This is an experience that should pay dividends later this season. They showed great resiliency and a positive approach.” noted Coach Raymond. 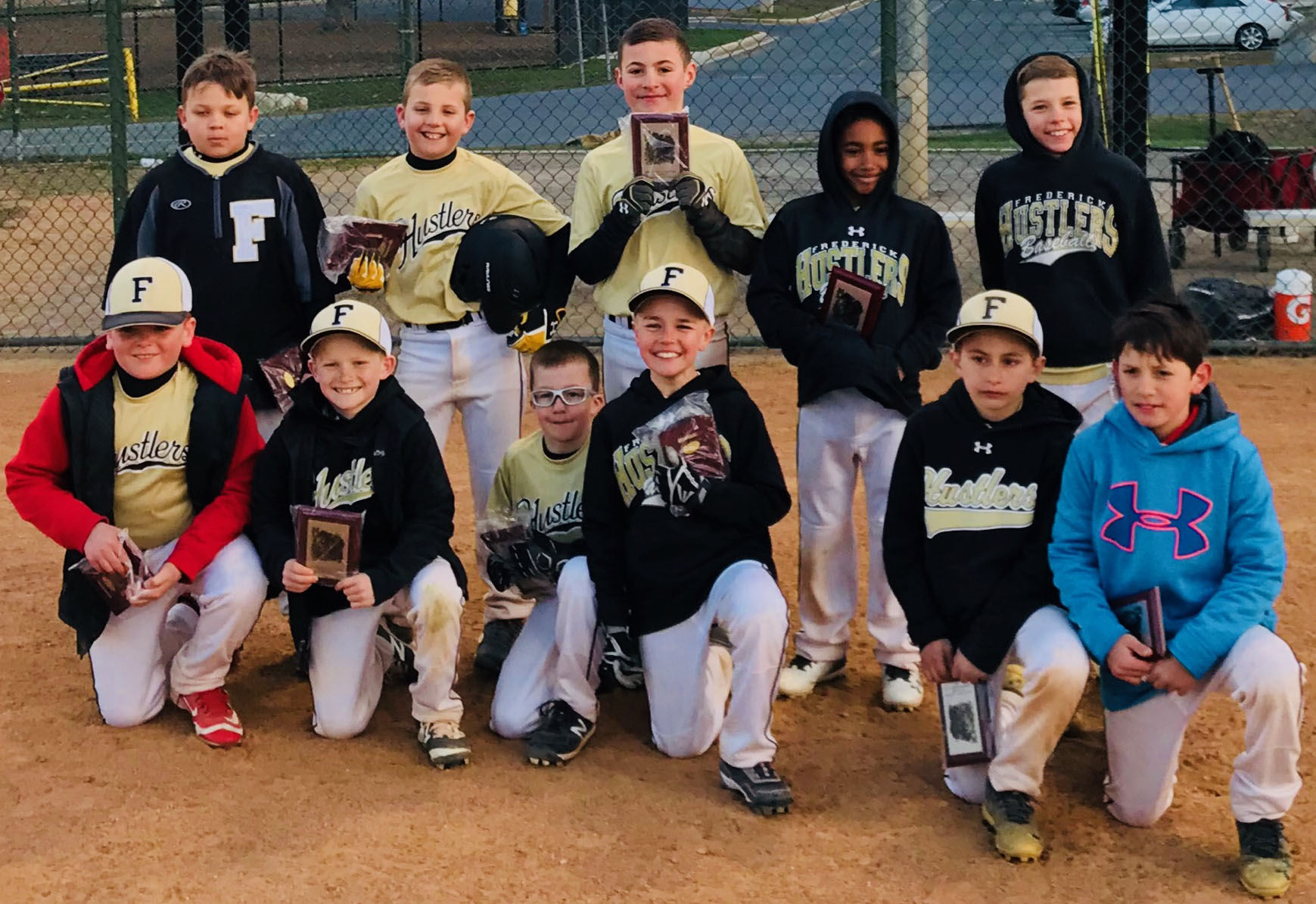